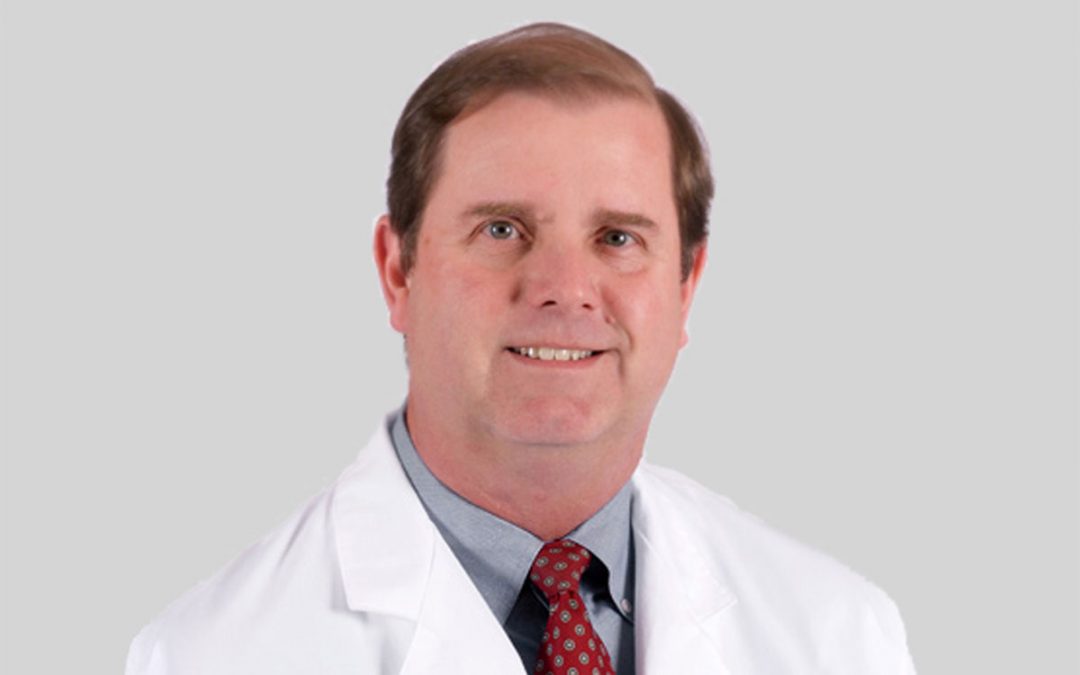 As a medical oncologist, Dr. Ray Page has treated thousands of cancer patients in North Texas with care and compassion. As a researcher driven to develop new chemotherapy drugs, he has given many others hope. As an educator, he has taught and mentored innumerable students and professionals at all levels of training and expertise at HSC and abroad.

In recognition of his work in cancer, the 1991 graduate of the University of North Texas Health Science Center has been named the 2020 recipient of the President’s Alumni Award for Distinguished Service.

Dr. Page said he is deeply honored and very humbled to receive the award. His wife, Dr. Sheila Page, also a Texas College of Osteopathic Medicine graduate, has been his inspiration and equally deserves the recognition, he said.

“Service to our society is rarely accomplished well from just an individual effort,” he said. “Outstanding service comes through teamwork. I certainly share this award with the hundreds of folks from UNTHSC, my cancer center, the medical community, my medical societies, and my church who all work together to make our world a better place.”

The President’s Alumni Award for Distinguished Service was created in 2017 to honor an HSC graduate for their outstanding personal and professional achievements in their field.

Dr. Page is a medical oncologist and hematologist for the past 24 years at The Center for Cancer and Blood Disorders where he has served as the President since 2007. He is also Director of Research and has been the Principle Investigator for more than 250 oncology clinical trials.

Early in his medical education, it was evident that Dr. Page was destined to become a leader in healthcare, said Lisa Nash, DO, Professor of Family Medicine and Senior Associate Dean.

“We all knew even back then to expect great things from him,” said Dr. Nash, who went to school with him. “He was a pioneer in the TCOM dual degree program and was someone we all considered to be “super smart”.
“He also demonstrates excellent people skills and a healthy dose of practicality, which is a very rare combination.”

Danny Jensen, Vice President for Governmental Affairs, said he always thought of Page as Dr. First.
“He was the first graduate in the country to receive a DO/Ph.D. the first DO Chief Fellow at MD Anderson, and he also brought the first pharmaceutical sponsored clinical trials for cancer to Fort Worth,” he said.

After earning his Ph.D. in Pharmacology and his Doctorate in Osteopathic Medicine, Dr. Page completed his residency in internal medicine at the Osteopathic Medical Center of Texas. He then completed a combined oncology/hematology fellowship at the University of Texas M. D. Anderson Cancer Center. While there, he was appointed Junior Faculty Associate and Chief Fellow.

After completing his training, Dr. Page returned to North Texas, where the Grand Prairie native has made many contributions to the community.

In 2018, Dr. Page was presented the ASCO “Advocate of the Year” Award. He served over the past several years as an inaugural mentor to a number of ASCO Healthcare Policy Fellows. The following year he received the prestigious Fellow of ASCO (FASCO) designation for many years of dedicated volunteer contributions.

Dr. Page is politically active both in Texas and nationally, working on numerous cancer-related legislative issues and writing many policies influencing healthcare. He is the Past President and current Secretary of the Texas Society of Clinical Oncology.

At HSC he continues to be involved in various programs including serving through adjunct professorships in the Departments of Medicine, Pharmacology, and Graduate School of Biomedical Sciences. In 2004 he was named as a Distinguished Alumnus of the Graduate School. He has previously been named a Distinguished Alumnus at his alma maters of Southwestern University and Grand Prairie High School.

“He has been a great supporter of medical education and has taught and mentored countless medical students and residents over the years,” Dr. Nash said. “When we developed new residency programs in Weatherford, he was one of our earliest and greatest supporters.